An Interface Tailor-made for Singer-songwriters and Podcasters

Here at M-Audio, we believe that every musician should have the opportunity to capture their ideas and create songs at home. That’s why we’re especially excited about the M-Audio M-Track Solo USB audio interface! Intended for singer-songwriters, podcasters, and solo musicians, it gives you a top-quality Crystal mic preamp and super-accurate DI for guitar, bass, and keyboard. A 1/8-inch headphone jack and stereo outputs let you monitor with headphones or traditional speakers. The M-Track Solo also includes bundled software so you can start recording right away. If you’re after an interface that’s easy to use, but gentle on your wallet, then the M-Audio M-Track Solo is a perfect match.

M-Track Solo includes bundled software so you can start making music right off the bat. You get two DAWs for tracking, mixing, and mastering; Pro Tools | First M-Audio Edition and MPC Beats. You’ll love how quickly and easily MPC Beats helps you dial in great-sounding beats for your next project. You also get 20 plug-ins from Avid, the company behind Pro Tools. Finally, Xpand!2 and Eleven Lite offer capable virtual synthesis and amp emulation. In short, the M-Track Solo has enough software to fit the needs of any creator.

The M-Audio M-Track Solo audio interface’s output switch lets you monitor however you want. You can monitor direct for zero-latency monitoring of your inputs, letting you experience your performance clearly, with no delay or lag in the returning signal. USB monitoring lets you hear all the plug-ins and processing as you’re progressing through a track. We know how performances can suffer if you can’t hear yourself properly. With its intuitive feature set, the M-Track Solo is designed to help you bring out your best!

If you’re on the move and want to keep your audio equipment close at hand, you need the M-Track Solo. It has a streamlined form factor that makes it easy to slip into a travel bag or backpack. The durable construction will withstand light wear on the way to and from your destination. M-Audio M-Track Solo is ready for a lifetime of recording, whether you’re in your studio, hotel room, living room, or anywhere between. 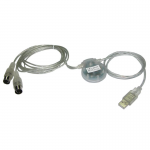 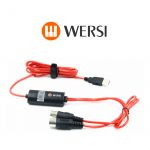 Specification: Latest version with a built-in driver USB powered and class compliant for true plug & play. Just connect to a computer USB socket for automatic installation of the driver 1 in + 1 out MIDI interface, 16 MIDI input channels & 16 MIDI output channels LED indicate MIDI in signal and MIDI out signal Supports Windows XP, Vista, Win 7 and MAC OS X 10.1 or later Instructions for Use: 1. Connect the cable marked "IN" to the MIDI "OUT" socket of a MIDI keyboard (or MIDI device) 2. Connect the cable marked "OUT" to the MIDI "IN" socket of a MIDI keyboard (of MIDI device) 3. Plug the USB cable into any free USB socket on your computer 4. Open your music software program, e.g. Cubase, Sonar, MIDI Connections, etc. 5. Set the music programs MIDI in and MIDI Out devices to "USB Audio Device" 6. Your USB to MIDI interface is now ready for use 7. To save potential problems, it is recommended that this interface is always connected to the same USB as it was originally installed on to prevent multiple installations of the driver Package Included: 1 x USB MIDI Cable
not rated 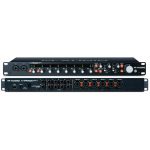 A Value-packed Interface for the Self-recording Musician

If you're putting together a home studio, the Behringer U-Phoria UMC404 USB 2.0 audio interface is worth a look. With 4 inputs and 4 outputs, the U-Phoria UMC404 is an excellent choice if you're a self-recording musician with a minimum of outboard gear. Add four remarkably pure, world-class MIDAS-designed mic pres and studio-grade 24-bit/192kHz converters to the mix, and you've got yourself a complete studio-in-a-box - right on your desktop. Make no mistake, the Behringer U-Phoria UMC404HD USB 2.0 audio interface is packed with value! Got questions? Sweetwater Sales Engineers receive ongoing product training on nearly everything we sell. Give us a call, we'll point you in the right direction!
Behringer U-Phoria UMC404HD USB 2.0 Audio Interface at a Glance:
Real MIDAS microphone preamplifier technology onboard One of the things that really makes the Behringer U-Phoria UMC404HD USB 2.0 audio interface stand out is its genuine MIDAS preamplifier technology. Known throughout the world of live sound for delivering ultra clear sound with plenty of headroom, MIDAS preamps are among the most popular mic pres on Earth. What's more, these preamps come standard with +48V phantom power onboard, so you can use your choice of quality condenser microphones with your U-Phoria UMC404HD. Call your Sweetwater Sales Engineer, and turn this U-Phoria UMC404HD into a killer package deal with the perfect microphones and monitors for your complete recording rig. Direct Monitor function provides latency-free input monitoring The Behringer U-Phoria UMC404HD USB 2.0 audio interface mix control gives you zero-latency input monitoring, letting you experience your performance clearly, with no delay or lag in the returning signal. It's a fact - if you can't hear yourself properly, your performance will suffer. Luckily, the U-Phoria UMC404HD is designed to bring out your best! Behringer - a brief history Uli Behringer showed an interest in music technology design at a young age, building his own synthesizer by the age of 16. In 1982, Uli began studying sound engineering and classical piano at the Robert Schumann conservatory in Dusseldorf, Germany. Uli's defining moment came when he was repairing a signal processor made by a high-end manufacturer. Despite the processor's expensive price tag, Uli realized that its internal components could be bought for a fraction of the cost. Being a strapped-for-cash student, Uli began building his own signal processors. Before he knew it, other students began requesting equipment from him. In 1989, after being bombarded with more orders than he could handle by himself, Uli created Behringer, Inc.
not rated